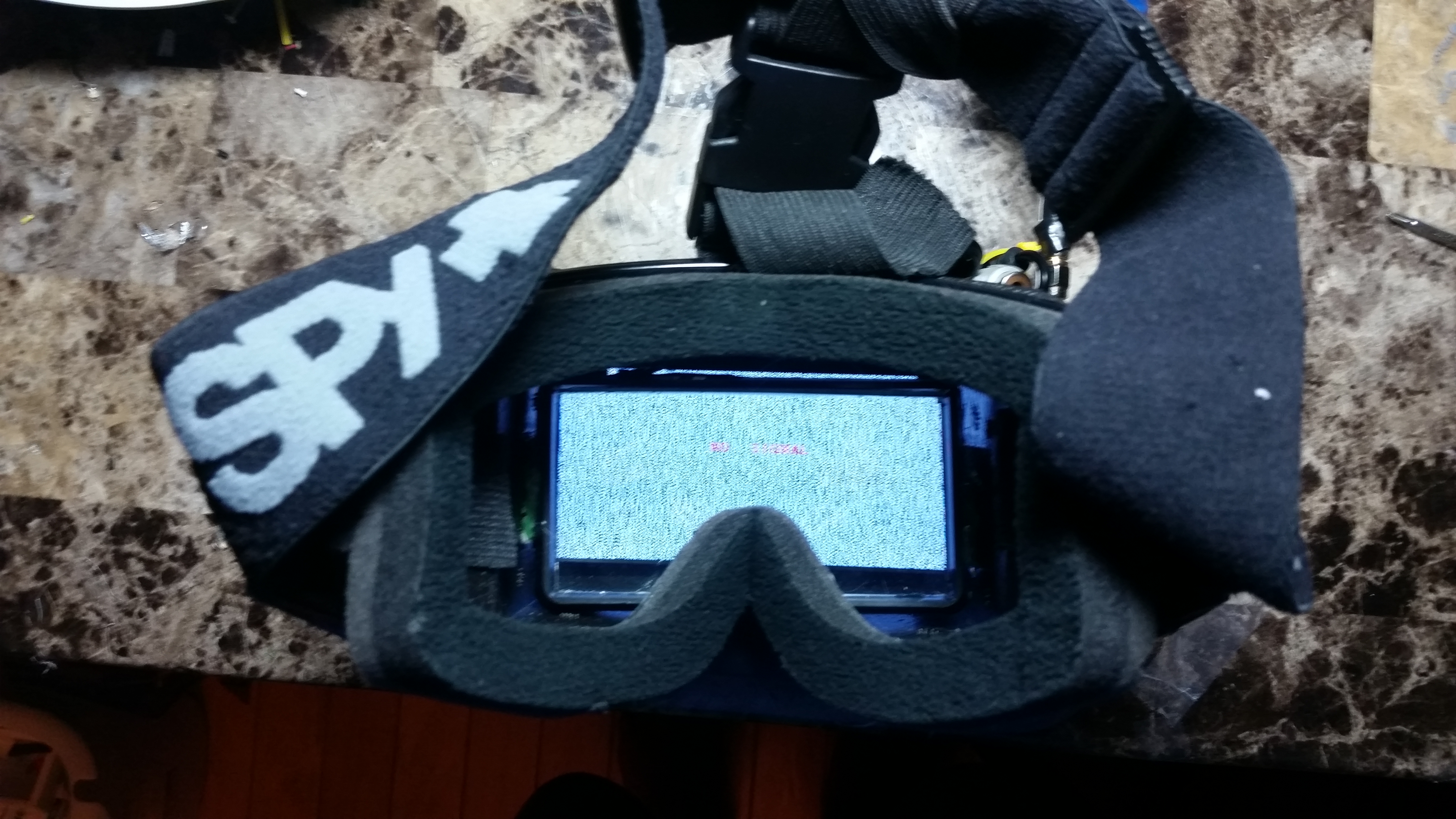 When I first got started with FPV, one of the bigger questions that I was trying to get answered was “what do I use for my FPV monitor/goggles.” I asked around, and I was eventually very impressed by the abilities of a few pilots to fly with the “Ghetto Goggles” from hobby king. Since good pilots were having success with them, I figured they would be worth trying out.

You can purchase them here from Hobby King.

I received them, and I absolutely loved them even just stock without ever having modified them. For $30-35 bucks they’re hard to beat for the price. I used them for about 3-4 months without modifying them, setting up a ground-station with a tripod whenever I went out flying.

Eventually, I got very sick of having to carry all the extra gear for a groundstation, so I decided to start making some changes. I’ll break these down in a series of lessons learned from working on these goggles, if you decide to buy them. ( One note — at the time of this writing, I HAVE tried the Hobby King Ghetto Goggles V2, and I prefer my modified version 1 goggles to the stock v2 goggles. )

Step 1: Don’t Glue the goggles together

As Hobby King learned with the version 2 goggles, it’s not worth it to glue the goggles together. If you ever want to get in to clean the lense, swap the screen, make a modification, it’s dangerous and painful to separate the glue. Just don’t — instead, you’re going to use a big rubber band or bungie cord to hold the whole thing together.

Step 2: Get the 4 inch Reading Magnifying Glass from Harbor Freight

Link to the Lens

If you’re not inside the United States, I’m sorry. 🙁 I’d be happy to help you get one of these if you are not within the states, just shoot me an email at paulnurkkala@gmail.com.

If you do NOTHING else suggested in this post, do this. IT IS WORTH IT. Seriously. My goggles were 1,000 times better with this glass lens than the stock lens that came with the goggles. It’s bigger, clearer, and it magnifies more. The ONLY problem is that the goggles weigh significantly more, but later on in the post we’ll fix that problem.

The lens does come with a handle on it, but I used a hacksaw to take it right off, and a little bit of sandpaper to wear the edge down a little bit.

This is another vast improvement over stock. The goggles are very uncomfortable and the screen is just a little bit too close to your eyes. Ski Goggles solve this in two ways by giving really solid cushion and a little bit extra material between your head and the goggle. I was able to remove the lens from a pair of ski goggles my dog ate, and glued them in to the frame as it was very easily. If you don’t have a pair, you can get them on amazon for 12 bucks. Completely worth the upgrade.

Your ghetto goggles came with an elastic strap. Don’t use this strap the way that it suggests, since you already put the ski goggles on, and those come with a strap. Instead, feed it through the top-middle of the goggles, and tie it on to the strap at the back of your head. This will help combat the extra weight from the electronics you’ll add later, and the lens you added earlier.

Worth sticking some zip ties in there to hold everything in place. There’s that bungie cord I was talking about.

With that bungie cord, it’s really easy to hook in the electronics for your receiver and battery. Just stick them under the bungie cord! I added some rubber bands to my VRX (video receiver) to make sure that it stays in place, but they probably aren’t even necessary.

Now that you have DIY, non-HD headplayss, you’re good to fly. Enjoy!

For those that live in Europe, Arne commented with a link to Ebay where you can purchase a similar magnifying lens for yourself, since the Harbor Freight one can’t be bought outside the USA. Purchase it on Ebay here: http://www.ebay.de/itm/Large-Reading-4X-Magnifying-Glass-Magnifier-Map-Book-Pocket-Light-Aid-Lens-Lense-/400985300263?hash=item5d5c961d27

Another international link for purchasing the magnifying lens.