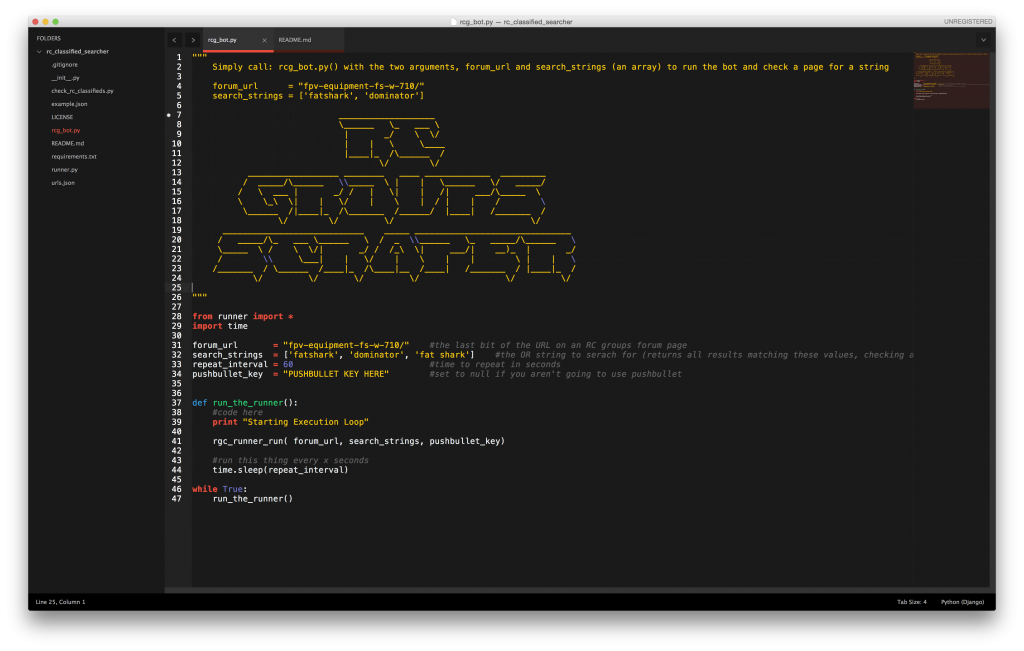 I, like many, am very lazy. I, like many, am also very interested in radio control things. I have a couple planes and a couple multicopters. As I’ve gotten into the hobby, I’ve found that myself and the members of the community are always on the prowl for good deals, and one of the hubs of those sorts of deals is consistently RC Groups. RC groups is a great resource for making purchases, but it’s not my favorite interface for finding deals. As a result, I automated it. Instead of having to go back to the website and refreshing every 10 minutes to see if the thing that I want is there, I made a bot that will go out to the site, scrape it, and pull information back to me whenever it finds new results. This is available as a public, free to change and manipulate and enjoy repository on Github here:

Link to the Repository

Please feel free to download the code and check it out. I’m fairly happy with it, but I’m not the greatest developer in the world, and I would love any feedback/pull requests that you’d be willing to contribute.

What is it and how does it work?

It’s a python script. It is a very simple script that uses python requests and beautiful soup to hit any given forum, find the for-sale items, and pull them down to have something done with them. You can do whatever you want with it. Bake it into a website, make an app to scrape a site, or build an RC groups CLI (Command Line Interface). It’s up to you! This would at least be a good start.

First of all, this project is dependent on the libraries that are included in requirements.txt. I personally use virtualenv to manage my libraries on a project by project basis. This is what I set up:

Doing all of this will run the bot that will continually go out to the site and check for deals. I have it defaulted to 1 minute (60 seconds). I have noticed some errors when you hit it more than a few times a minute, so I’d suggest leaving that high.

There are a few early steps that can be taken to make this project significantly better:

One thought on “RC Groups Scraper”