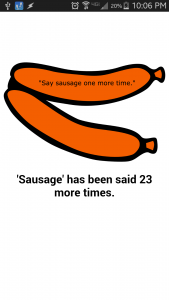 My friends and I have completely fallen in love with this series that Auralnauts, a YouTube channel that parodies and overwrites the sound from various videos. They do dubs, write original music, and just make some amazing content. I put their Star Wars Jedi Party series on the level of Princess Bride as a cult hit within my family.

As a result, I made an app based around my favorite line in the show.

The current sausage count is:

Go here to download the source code for the entire app for free and change it up/update it/make your own Sausage app!