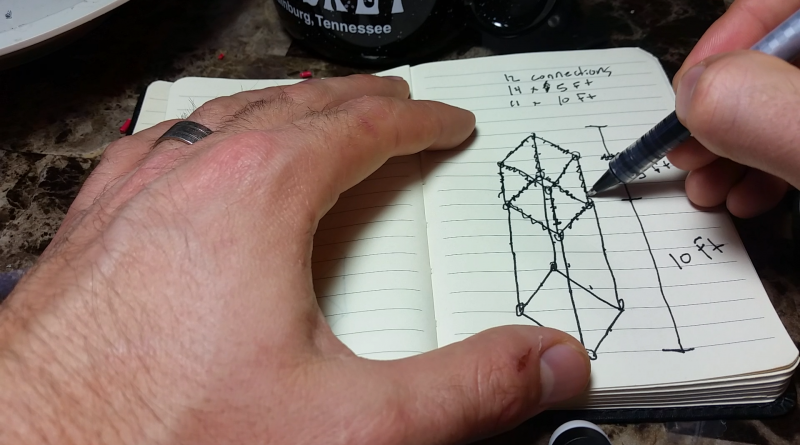 At F3 Expo down in Atlanta, Georgia, the main attraction of the freestyle course was a “tower” obstacle. This tower was a huge feature of the freestyle course, because it gave pilots the opportunity to “dive” down the tower, and do flips and rolls through the structure. It was both fun to fly and watch. More than this, we’ve been seeing “over-under” obstacles as popular elements for race courses. Drone nationals and IDRA both featured “over-under” obstacles as part of their courses, which supplimented the air gates and flags that have already saturated the FPV racing field.

Because of the upcoming popularity of the “over-under” style obstacle, I wanted to create one of my own for my local racing group to have available as something to practice with. Since we don’t have an official race league, and all of the cost of such an endeavour is straight out of pocket, buget is obviously a concern. Morover, since we aren’t using it for official racing events, it’s duraibility and ability to take a hit isn’t as important as budget. Thus, I chose PVC piping as my medium. It’s a very easy to use, low cost solution that has already become popular in building race gates and upright flags. Over under obstacles, unlike their flag and gate counterparts, add (in my mind) an awesome alternative to the former since they add an element of “verticality” to race courses. We are racing FLYING machines, but generally we build race courses that FPV cars could do. While these courses are certainly fun, I think adding the third dimension to the race makes for a much more exciting course.

This is the bill of materials for the nicknamed “tower of pain”, since it caused a few rather exciting wrecks for some of our newer pilots: 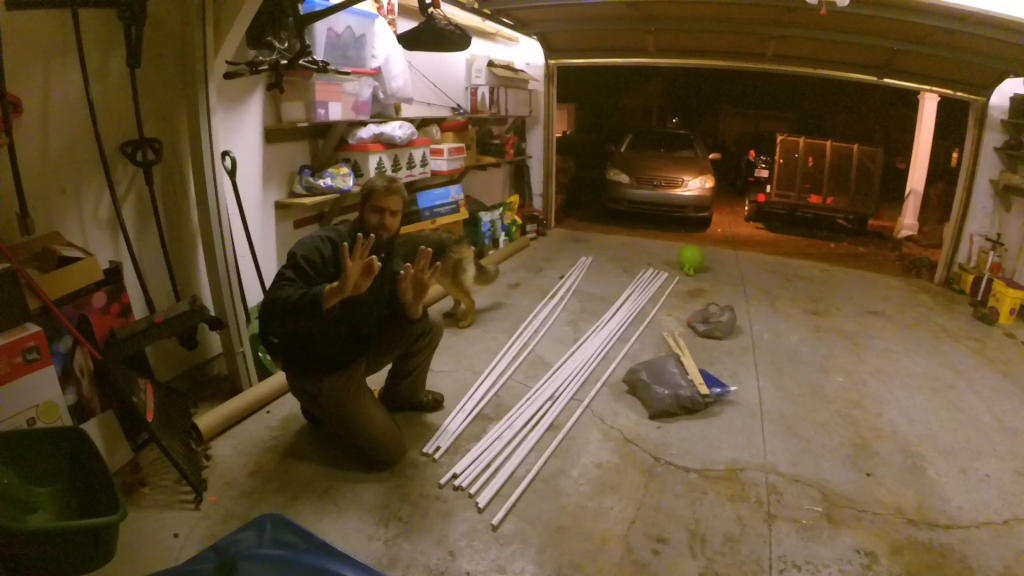 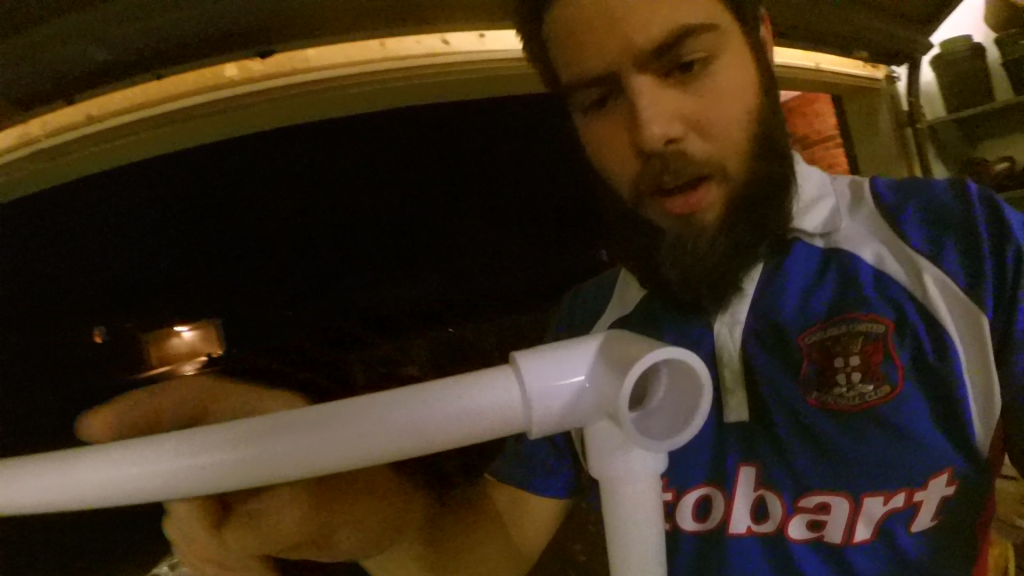 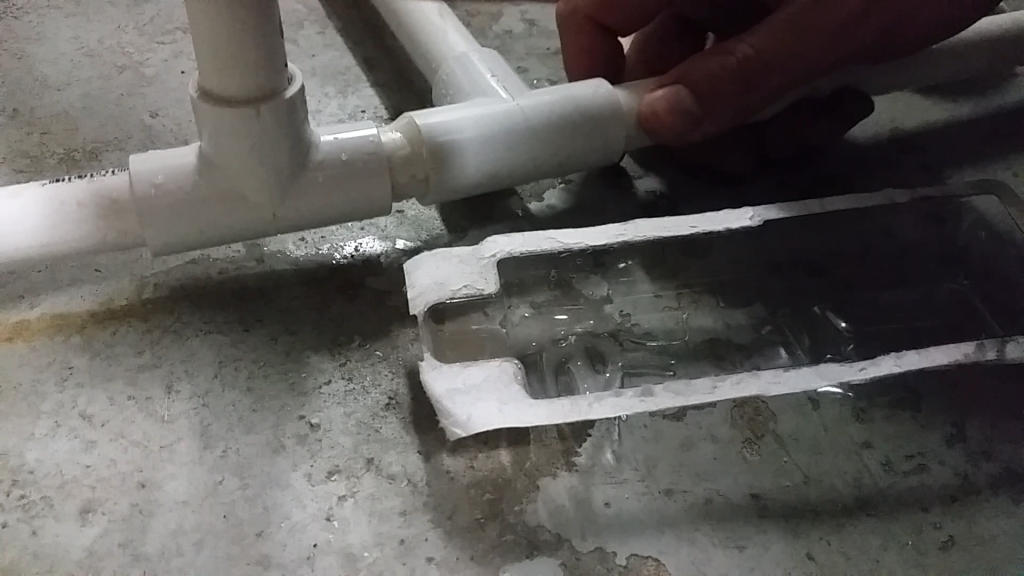 Thus, all in, I spent about $43.50 to build up one of the funnest obstacles I’ve ever gotten to fly with. 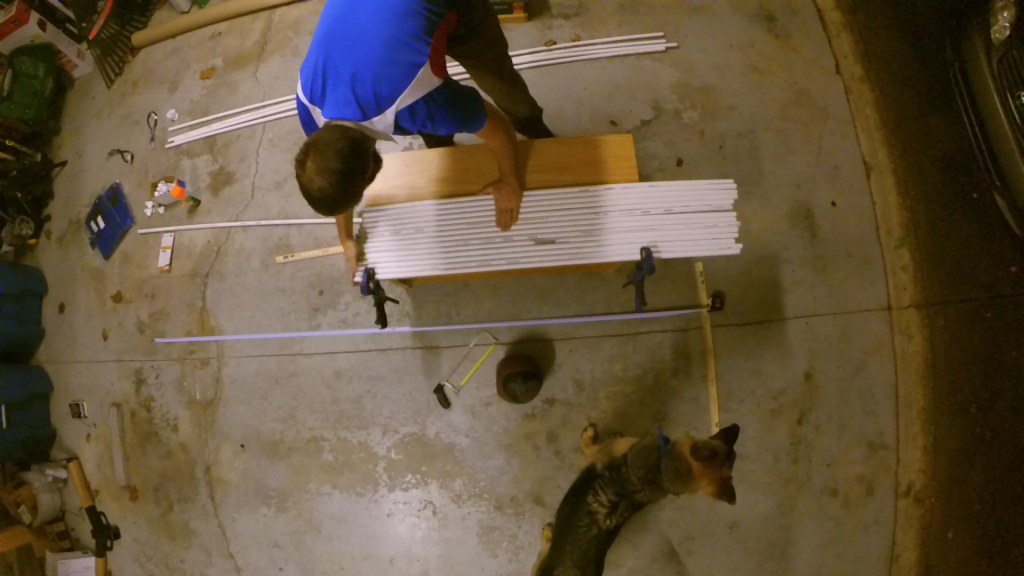 Step 2: Cut (4) 2 inch lengths of PVC from the 11th piece. These pieces will go between sets of two of the (8) 3 way right angle adaptors, creating (4) double right angle adaptors (you can use a miter saw or a fine-tooth hacksaw — whatever you have available to make the cuts)

Step 3: Dry-fit the entire contraption that you’ve assembled — the reason you want to dry fit it is to make sure that you have the middle adaptors the “double right angle” adaptors all facing in the proper directions. Because one crossbeam will be higher than the other, you want to make sure that they’re going to line up

Step 4: epoxy your double right angle adaptors so that they become one piece

Step 6: Create “tubes” in one long end of the tarp using duct tape. Start by folding the end of the tarp over on itself about an inch to an inch and a half. Tape off the ends, leaving a loop big enough to fit the 1/2 PVC through. Once two loops are formed on the edges, duct tape the entire 5′ length of the 5′ x 1′ strip of tarp so that you have one continuous tube down the side. 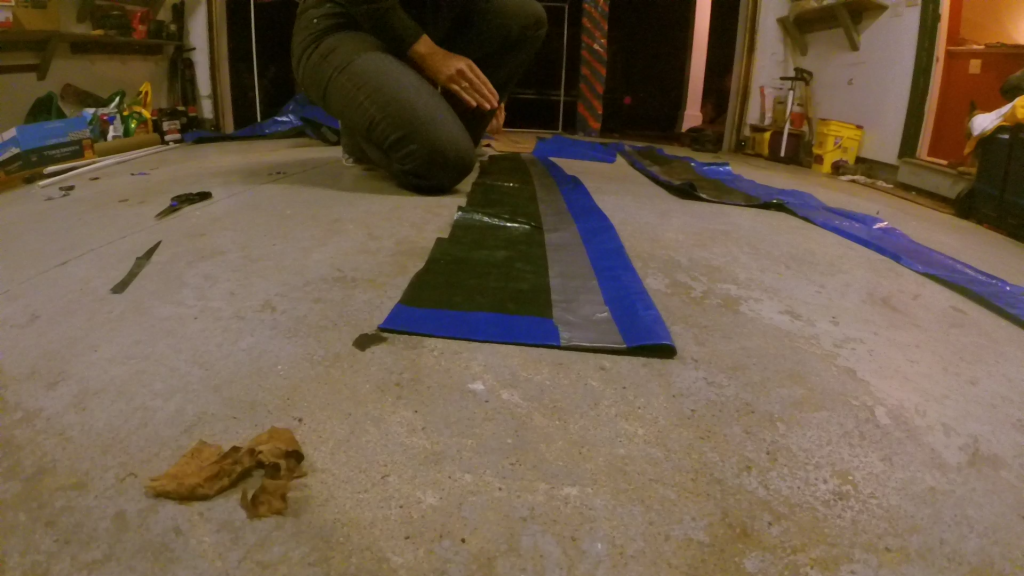 Step 7: Go to your assembled “tower of pain” and detach one length of PVC that you want the tarp piece to hang from. Slide the newly-formed loop over the length of the PVC so that the free end of the tarp “dangles” into the opening of the tower. 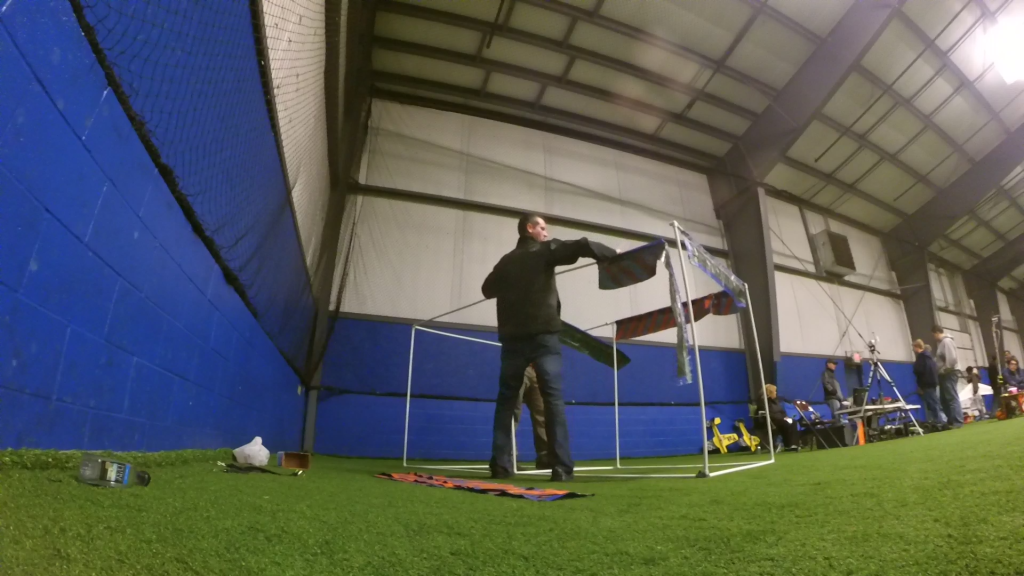 Step 8: Spray paint whatever design on the tarp you want 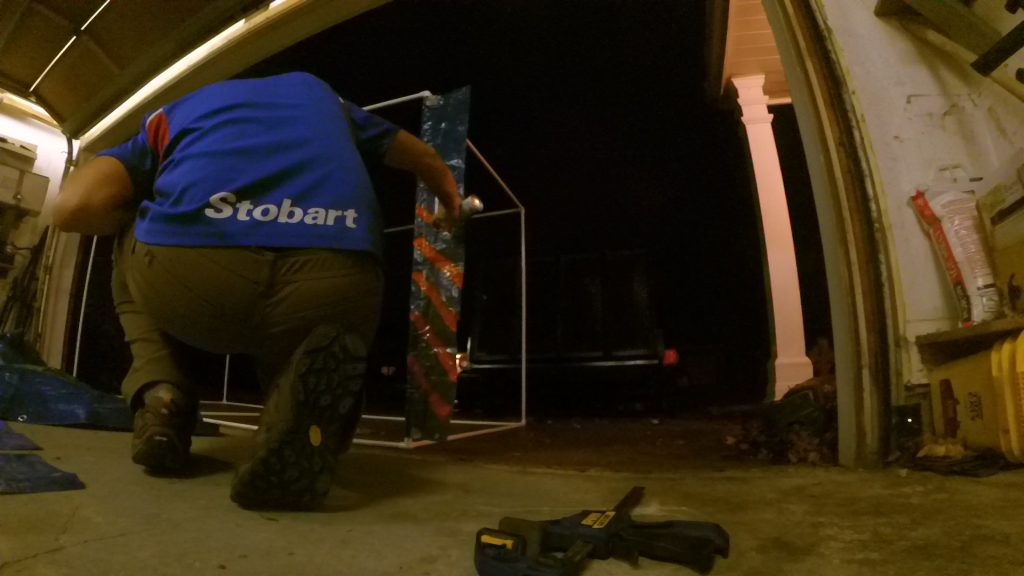 This was the process that I followed — I wanted to build something bigger, but the 1/2 PVC is just a little bit too flimsy to make it any taller. It MAY support a third square on top, but it would be very unstable. I’m sure that upgrading to a stronger type or bigger size of PVC might support some larger structures, but it would quickly become very cost-prohibitive.

Rod found this link for a company that sells “structural” PVC fittings: http://www.formufit.com/4-way-tee-furniture-grade-1-2-pvc-fitting-connector/

One thought on “Tower of Pain — An FPV Racing Verticality Obstacle”