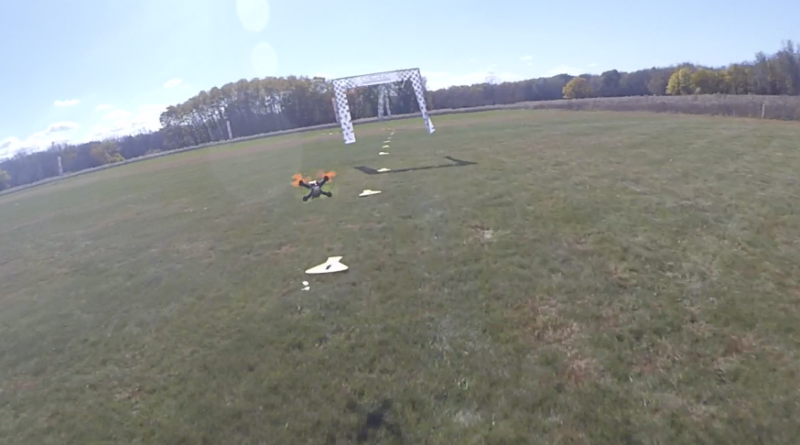 The purpose of this post is to provide a little extra clarity and detail around the function of the race, how it went, and give some context and feedback.

After a couple weeks of practicing, I headed up to Chicago from Indianapolis (about a 3 hour drive) to race. My friend Patrick and I left Indy at about 7a to arrive by 9a (because the timezone changes on the way to Illinois). We arrived on time to find the course largely already set up. The course was roughly “gun” shaped, with few gates and a couple flags. See a picture of the course layout below, which when we first saw it, I called the “pack puffer”.

This course was very large — it was roughly 1.5 soccer fields down the straights, so it there was a lot of room to make up for. The race was “open spec” which meant that any 4s, 6inch, 2208 and below quapter (quad-copter) was allowed to compete. This meant that anyone flying 3S had zero chance to compete, since the straights and “butt” of the gun handle were flat out. I managed to set the fastest in-race lap time of 21.69 seconds (you can see the entire race results here), so I do have some thoughts and opinions on how the course is laid out:

The race followed what seems to be a set of local standards. I’ve seen this a couple times when I’ve been racing up in Chicago. Their process essentially comes down to “laps completed” rather than “raw speed” as a way to let those that crash out in an early race to “come back” and make up for those crashes. So, in general, they try to time the laps to be able to complete, on average, a number of laps in 3 minutes. So, the goal is to make the lap take about 30 seconds so that you can start your 7th lap before 30 seconds timer is up. You are allowed to finish the lap you’re on when the timer goes off. But, this also can reward faster pilots because if they bring their lap times down to below 25.7 seconds, they can start their 8th lap before the timer goes off. But when you’re blitzing that fast, there’s a higher chance of crashing. It’s an interesting way of solving the problem, because it rewards consistency more than it does all out speed. But it can be frustrating when you crash for a stupid reason or technical reason.

We had two qualifying/placing rounds for the 20 pilots and one final round where the winner takes all. Between rounds, open practice was allowed.

For me, in a word, not well. I completed my first qualifying round with flying colors. I beat all racers in my “heat” but crashed during my sixth lap. Minor crash, no damage, but I was on track for 7 which I did not complete. During open practice between my 1st and 2nd qualifier, I was doing a practice flight when someone powered on their quad and knocked me out of the sky, causing major damage to my quad. I was able to fix the structure damage to the frame, but even after brief testing in which the quad flew well, it did not take off for qualifier 2, which meant I did not set any laps for the second qualifier. Thus, for the final round (after I replaced a motor), I was seeded in heat 3 (essentially 11th place) and won my heat. During that race, I set the fastest “official” (set during a race) lap time for the day. My friend Patrick took 2nd place overall. Afterwards, we all grabbed our GoPros and started filming freestyle and having a good time. Because the structural integrity of my frame was shot from the practice crash, in a fairly severe crash, the quad essentially ripped in two, stopping the fun for the day. 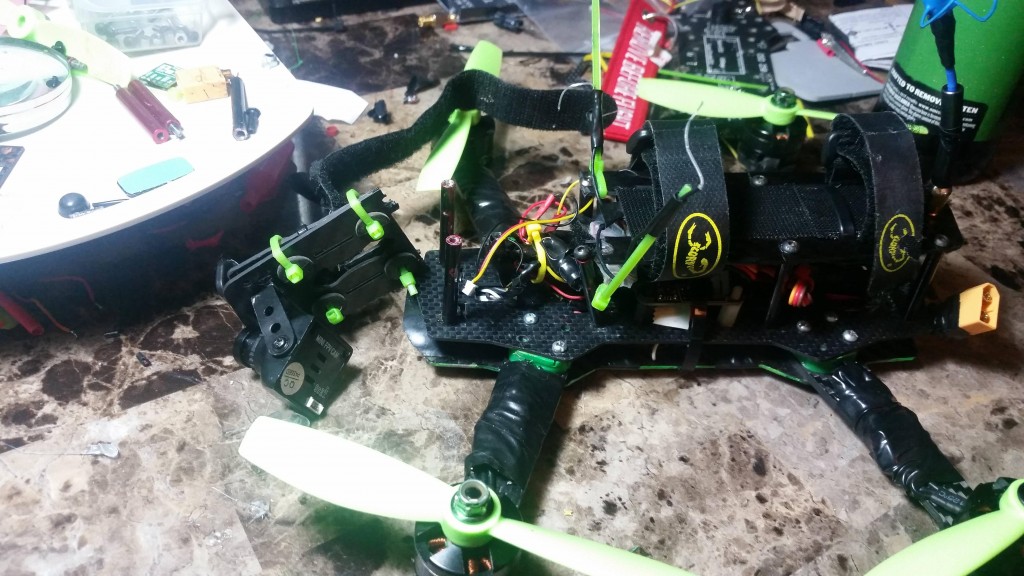